Gaming on a budget is hard, but not impossible. It seems easy to find PC components, especially graphics cards that cost hundreds and hundreds of dollars. Not everyone can afford to spend so much on a computer. We know that it’s not easy to find cheap, quality gaming components at a small budget, but that’s why we made this list for you that will help you find the best graphics card under 100 dollars.

We always recommend that you build your own computer, assembling the different parts so that you know exactly what you’re putting into it. Getting a gaming desktop computer is like getting your meal, if you do it at home you can be sure what’s in there. It will also be cheaper this way, and it’s great so that you get to know more about computers too, there’s no downside.

Just so you know, if you click on a product and decide to buy it, we may earn a small commission.

The MSI GeForce GT 710 is one of the most affordable gaming graphics cards you can buy right now. For much less than $100, It’s not the most modern graphics card you can get right now, in fact, it is pretty outdated. So you shouldn’t expect to play the latest games at the highest settings, but you can run a decent amount of games though.

This MSI Geforce GT 710 has 2GB of DDR3 memory, and a memory clock of 1600MHz, so you can get some nice results with this. The HDMI connectors offer a maximum resolution of 4096 x 2160 at 24 hertz, although it’s not recommended that you use this resolution. It should work out fine for running older games.

This is a low profile card, so it’s perfect for a small rig. It may not sound like the best budget card, but it’s perfect if you’re trying to build a machine capable of running older games on a really small budget. With a price tag of under $60, it costs less than most new games you can buy right now. Not to mention that MSI has always been a trustworthy brand when it comes to high-quality graphics cards.

EVGA is definitely one of the most popular brands of Nvidia graphics cards in the world. They deliver the best quality and some of the best specs in graphics cards in a wide price range. This time it’s right on the $100 mark But this is the one you want to get if you can afford it.

This low profile graphics card is excellent for the price, offering great performance at a compact size. With 2048MB of 64bit GDDR5 Memory, a Base Clock of 1290 MHz with a Boost Clock of 1544MHz, you can even play modern games with this.

Sure, you won’t play at high settings, let alone ultra settings. But you will be able to play most games at low, or even medium. If you tweak some settings and are okay with not playing games at a 1080p resolution you could even play some at high. However, it’s worth mentioning that the cooling in this card is passive, so you shouldn’t really push it too much

It’s all about playing with the settings in each game, and if you combine this with a nice processor, you’ll get nice results for a low price. This is the kind of graphics card you should get not only for gaming but to get an overall better computer experience.

Designed for PCI Express 3.0 architecture, it offers the best speeds in data transfer, making it perfect for bandwidth consuming games and software. The GT 1030 is the best you can buy at this price range, so you’ll see more of them on this list, but from different manufacturers. 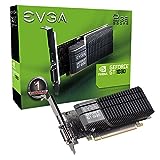 Another Nvidia 1030 here, this time it comes from Gigabyte. It bears similar specs to the ones in the EVGA, but there are some small differences that make it a best graphics card under 100.

First of all, this card is a little cheaper than the EVGA, but only in price. This Gigabyte card includes an aluminum chassis with an 80mm fan included and attached to the base. Nvidia cards tend to get a bit hot, so it’s always nice to have a fan cooler.

Aside from the included fan cooler and the nice design, there really isn’t much difference with the performance. But thanks to the fan cooler, there’s reduced stuttering caused by overheating. And your graphics card could have a longer lifespan.

It’s well-known that Nvidia tends to be more expensive than AMD Radeon, so it’s only natural that you0d find an AMD card here. The MSI Gaming Radeon RX 560 graphics card is capable of delivering a decent performance right at the $100 price mark.

It’s rocking 2GB of DDR5 memory and it has a 128-bit memory interface. It’s built with a PCI-Express x16. While it may not give you the software advantages of an Nvidia graphics card, AMD has plenty of good stuff to offer too. It does deliver a better gaming performance in most cases than the Nvidia 1030. But you’ll have to deal with not having the software enhancements only Nvidia offers.

Still, AMD Radeon has a solid fan base, and there’s a good reason for this. It delivers excellent performance at a lower price than Nvidia. And there are some nice monitors with AMD FreeSync enhancements your gaming experience could be much better. This card, just like the 1030 chipset, will have a lot of limitations, but it will allow you to play most casual games. And it doesn’t stop there, you could even play modern games, as long as you adjust the settings to perform well.

It supports multiple monitors and a 4K video playback too, so it’s great for setting up a media entertainment station. You can really squeeze this little card a lot, if the rest of your setup allows it, you could even use it for VR. The fan cooler mounted in will keep it cool on your gaming sessions, or even when watching movies in 4K.

Even though the last one in the list so far was the RX 560, you should probably check out this Biostar Radeon RX 550 too. You shouldn’t just go by the number after the RX. This graphics card is the only one on our list to feature 4GB of GDDR5 memory.

Just like the AMD Radeon 560, it has a 128-bit memory interface. It’s perfect for bandwidth-hungry titles. It supports HDMI 4K output and a really powerful GPU. you could play many modern games as long as you adjust the settings accordingly.

This graphics card is perfect not only for gaming but also for editing software and rendering. You could do some real professional work with this, and you’d still be under the $100 mark. The integrated heatsink and fan cooler are perfect for keeping your card cool while going on intense game sessions. Unless you really need the Nvidia optimized features, you should really just get this card. if your budget allows it that is. 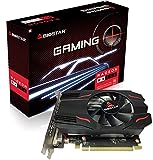 To wrap things up, here we have yet another Nvidia 1030 graphics card. This time from MSI, this graphics card is nice and powerful, and for an affordable price. The low profile is meant for an adequate motherboard.

The specs are once again similar to the other cards with this chipset included in the list. It features a PCI Express x16 3.0 architecture and offers you a DisplayPort and an HDMI. The heatsinks included in the card keep it cool with the help of the mounted cooling fan. But thanks to its design, the fan cooler is used at low speed unless it’s really required to. This is excellent for when you need a silent gaming experience.

Even if you’re not gaming, it’s great for average, everyday use. The silence is excellent for media consumption since there’s no annoying noise interfering. The 2GB of included GDDR5 memory is great for media consuming and casual gaming. But since it’s one of the quietest and efficient cards here, it’s perfect for building a multimedia center too.

MSI is widely known for manufacturing high-quality computer cards and components, so you can rest assured that this card should last you a long time. It is arguably the best graphics card under 100 on our list.

Now, we mentioned that it’s hard but not impossible to be a gamer on a budget, but there are downsides to this. Expensive components also tend to deliver better results than the cheaper ones. It’s recommended to understand the pros and cons of each part of your computer. Still, it is possible to have an excellent gaming computer with a budget graphics card which is why we made a list for the best graphics card under 100.

So keep in mind that when you’re saving money on your graphics card, you’ll be getting a much more limited experience. Still, some gamers can’t spend too much money, or maybe you’re just a casual gamer. Some users just want to play some light, casual games from time to time.

Whatever the case, it’s true that having a graphics card is always recommended. Most editing software will also benefit from having a graphics card, and even playing videos can be enhanced with a graphics card. There are a few options when considering a best graphics card under 100, but many of them are named similarly. Some cards are similar in specs, so you’d have to choose depending on the manufacturer of your choice. In the end, it becomes a decision based on the trust you have for a certain brand.

Here, we talked about which are the best ones you can buy right now. Most of these are a good graphics card that will last for a long time.

Whether you are a gamer that is on a budget, or are just building your first gaming PC and are looking for the best graphics card under 100, there are many great choices on our list. The thing that makes gaming so unique is that you are limited to your worst piece of hardware. For example, you may try to save dollars here and there on various components, but they will always remain your bottleneck until you upgrade them. Just like you wouldn’t put cheap, unreliable wheels on a Furari, you don’t want to put a cheap graphics card within an expensive gaming setup. So, if these GPUs are adequate for your setup, perfect! If they are a bit underpriced, you may want to check out our list of the best graphics cards under 300. If you decide to buy one of these, let us know which one you went with and be sure to check out our other buying guides. Thank you for reading, let us know your thoughts.